All about the thermal drone and its fields of application

For several years, the use of the thermal drone is becoming more and more popular. This rise is due to the development and improvement of these devices and their embedded technologies. The thermal domain is no exception to the rule, in fact, drones equipped with thermal cameras are increasingly used in fire detection, search and rescue missions or in the inspection of public utility networks. The deployment of this tool could be the answer to many problems in the more or less near future.

The different fields of application of thermal vision drones.

Despite the fact that thermal imaging by drone is fairly new, some manufacturers already have many thermal drones in operation. These different symbolic missions can serve as inspiration for uses that wish to acquire this technology.

In March 2022, firefighters used thermal drones to make an accurate assessment of the fire and get an accurate survey of the situation. Drones have many advantages: they can fly through thick smoke, allow users to be as close as possible to the disaster area while remaining in complete safety in order to guide the teams. All of this allowed firefighters to move the fire away from residential areas and control it much more quickly. Other examples have also been successful:

These applications of thermal drone technology demonstrate how important it is to also have a good payload. Drones equipped with thermal imaging systems are already making a difference, and the equipment continues to evolve.

Thermal imaging, how does it work?

After seeing the present and future possibilities of thermal drones, it seems important to define how thermal imaging works in order to effectively master this new technology if you wish to use or develop it within your company.

Infrared radiation, more commonly known as heat, is essentially due to the random vibrations of atoms. Most objects emit a thermal signature depending on the number of atoms in motion. The greater this movement, the hotter the object. Thermography is the process of studying these thermal signatures and applying the knowledge gained from thermal imaging.

Humans feel the heat, but cannot see it with the naked eye. How is this possible? Because this radiation occurs on an electromagnetic wavelength that the eye cannot detect. Thermal cameras are designed to transform infrared signatures into something visible to humans.

Thermal cameras and sensors for drone

Let’s move on to thermal cameras, these devices use specialized lenses that capture infrared frequencies. In this way the thermal sensors will display the results on a screen. To mount your infrared camera on your drone, your camera will have to be fixed on the gimbal so that the image is stabilized and you can enjoy a 360 degree view. Like quadricopters, these sensors have undergone many improvements, which has allowed them to be democratized and therefore much more affordable.

Analysis and understanding of thermal surveys

Once your thermal capture missions have been carried out thanks to the drone and its embedded technology, the data will be displayed on a screen in the form of an image that the operator can then analyze.
Thanks to a software dedicated to this process, the operator can modify various options such as the color used to accentuate or not the heat present on the images. Each statement can extract different data and these options include:

Of course, these three non-exhaustive examples represent the beginning of countless other options. Indeed, depending on the camera used, some are more advanced than others in terms of technology and will allow you to obtain more detailed results. The high-end sensors can offer up to 12 distinct colors and also contain thermographic and temperature data, as well as GPS tags.

How to obtain accurate measurements during thermal inspections?

Despite the technological progress of these tools, it is essential to take into account certain environmental parameters for optimal use and measurement. Excessive heat or humidity, clouds, rain or snowfall can negatively impact the results. It is also necessary to be attentive to the parts or objects out of glass which tend to collect heat and of this fact distort the thermal reading.

Another more technical aspect to which we must also be vigilant is the coating used on an object, because depending on it, on two identical pieces with a different surface, the measurements will not be the same.

In conclusion to use a thermal sensor in the best way, it is important to always keep in mind these following factors that can influence your results:

By taking these key factors into account, it is possible to get an accurate picture of the thermal properties of an object or a landscape.

Hormis ces aspects, il est également important d’être consciencieux avec vos appareils et de les entretenir correctement. Although the drone and the embedded technology are better and more durable than in the past, they are still precise instruments that require precise adjustments and special attention during their use.

For example, for your thermal camera, it is not recommended to expose the infrared lens to strong energy sources such as the sun, lava or a laser beam. Depending on the drone chosen, it will also be important to refer to the manufacturer’s manuals to know its fields of action and what is possible or not to achieve with it in order to preserve it. You can also contact an expertise center for maintenance and updates of your quadricopter.

The use of thermal drones today and in the future.

Thermal drones are performing more missions today than in the past, especially with more accurate sensors and more affordable prices opening up new possibilities. This democratization is continuous and new use cases are constantly opening up.

If your organization is engaged in any of the following activities, a thermal drone may be the perfect piece of technology for your needs:

In addition, if your company needs to perform inspections in hard-to-reach areas or in unfavorable weather conditions, a thermal drone can fit the bill, all while remaining completely safe.

Which professional thermal drone to choose ?

If the choice of the camera is important for the performance of the thermal drone, the chosen drone is just as important. The right device will offer speed, maneuverability, operating range, battery life and other features that will determine the types of tasks you can accomplish.

Here is a non-exhaustive list of drones on the market that you can choose for your thermal deployment:

The Mavic 2 Enterprise is extremely compact and lightweight and contains a wide range of powerful features. It has a built-in 640×512 thermal sensor, capable of 16x zoom and 30 Hz frame rate. The drone’s RTK module enables centimeter-accurate positioning, and its ability to work with 240 waypoints makes it perfect for automated inspection missions, even in complex environments.

The M30T is a rugged DJI drone built to withstand the elements and designed to be highly portable despite its impressive sensor payload. The camera specifications are identical to those of the Mavic 2 Enterprise Advanced with a resolution of 640×152 and 30 frames per second. The M30T’s control system is particularly advanced, with a 7-inch widescreen display on the dual-stick control system designed for corporate drone pilots.

The M300 RTK is DJI’s most technologically advanced drone, with the ability to carry up to three payloads simultaneously. At most, the drone can be equipped with one ascending turret and two descending turrets. The M300 RTK uses a new display system, incorporating more information on the main screen, to help the drone operator navigate around potential obstacles. Users can capture unprecedented levels of high resolution thermal information with this device.

Which thermal sensor to choose?

The Zenmuse H20N thermal camera is capable of detecting light sources as low as 0.0001 lux and has starlight sensors built into its zoom and wide angle cameras. Combine it with thermal and zoom cameras and a laser rangefinder for a versatile hybrid payload to match. Two thermal imaging cameras offer 2x and 8x zoom respectively, for a maximum total zoom of 32x. Find hot spots and inspect areas in detail. The H20N also supports synchronized zooming between Starlight thermal and night vision cameras. Users can shade the images simultaneously. This multiplies efficiency and makes it easier to compare details side by side.

How can DroneXperts help you? Accompaniment, prices.

Whatever thermal drone configuration you choose, you can count on our center of expertise and its team of experts to help you decide if a thermal imaging device is right for your situation, contact one of our representatives. The drone in the mining sector, article La Presse+ What is the price of a Matrice 300 RTK in Canada ? Comparing all the combos. 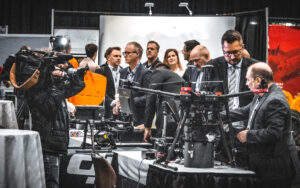 A green technology that gets people talking